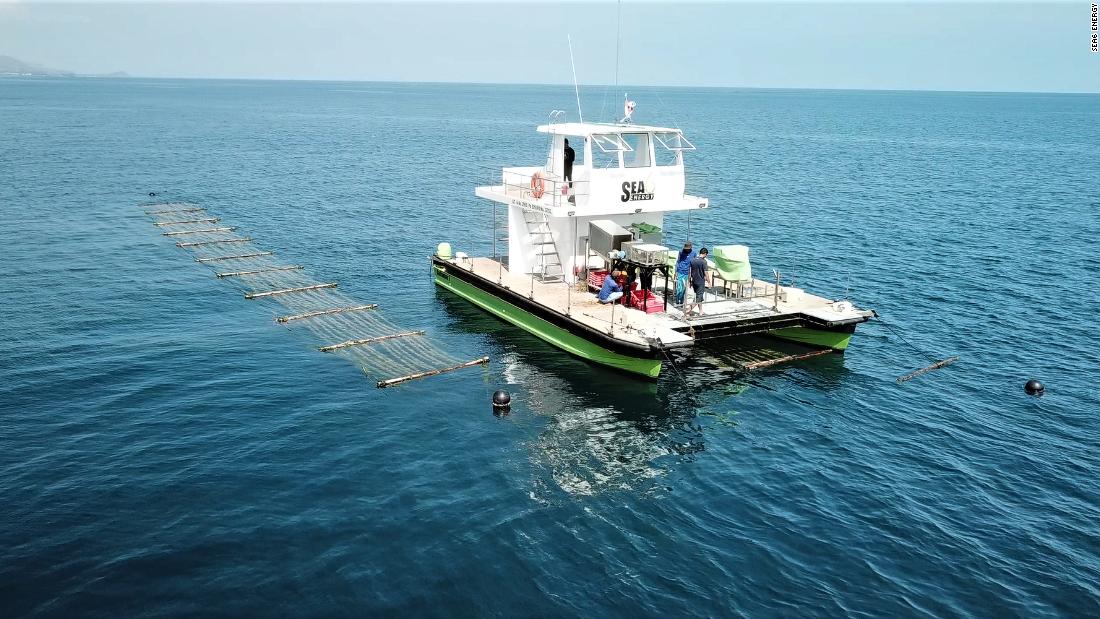 An Indian startup could revolutionize ocean agriculture with its “marine combine”

Usually, algae are grown on ropes or nets suspended in the ocean, but current techniques make large-scale cultivation almost impossible. Ocean agriculture is in the ‘stone age’, says Shrikumar Suryanarayan, co-founder and CEO of Bangalore-based Sea6 Energy and former head of research and development at Biocon, an Indian pharmaceutical company specializing in medicines of biological origin. “It’s like using a trowel and a pickaxe to cultivate land.”

Founded in 2010, Sea6 Energy wants to mechanize ocean agriculture, just as tractors have done for agriculture, with its “Sea Combine”, an automated catamaran that simultaneously harvests and replants algae in the ocean.

The machine moves back and forth between the rows of algae, harvesting the fully growing plants and replacing them with freshly seeded rows.

A prototype is currently being deployed at the company’s seaweed farm off the coast of Indonesia. The Southeast Asian nation has a tradition of seaweed cultivation which involves villagers tying pieces of seaweed to ropes and carrying them out to sea, before manually harvesting the lines, and there is a strong appetite for the harvest there, according to Suryanarayan. As technology develops and the market expands, the company intends to deploy more combines, including in its home country India.

As the global seaweed industry doubled in size between 2005 and 2015, and produced 33 million metric tonnes in 2018, labor-intensive and costly production is expected to hamper market growth, according to the company. ‘Fortune Business Insights market research.

The price of algae limits their potential uses, Suryanarayan says, and in today’s market, it is often only economically viable to use algae for high-priced food applications.

Suryanarayan hopes the Sea Combine will cut costs and make seaweed cheaper, so it can be used more widely. Doing this will not harm local livelihoods, he believes, as village cooperatives could rent out the machines, allowing them to cultivate a larger area.

The netting tubes are filled with algae on the deck and put back into the water for regrowth. Credit: Sea6 Energy

The Sea Combine is just a “tool” in the larger operation of Sea6 Energy, says Suryanarayan. The company, which has raised $ 20 million in funding, is currently using the algae harvested by the machine to make products such as animal feed and agricultural fertilizers on a small scale, he says.

While Suryanarayan admits that the company’s journey has been slow, mainly due to a lack of investment in its early years, he believes it is now at an “inflection point” as foundations have been laid, technology developed and interest is considerable. worldwide in the potential of algae to mitigate climate change.

The company’s next step is to expand its range of algae products, starting with bioplastics, which it aims to start producing within the next three years.

Algae has long been touted as a biodegradable alternative to plastic, with the EU funding research into it over the past decade. London-based startup Notpla has previously used seaweed to create sustainable packaging for drinks and sauces. Sea6 Energy is in the early stages of developing its own biodegradable film to replace plastic and paper bags.
But the company’s boldest ambition is to convert algae into biofuel, helping to reduce India’s dependence on crude oil. Scientific research conducted by the company shows it would be technically feasible, but Suryanarayan admits there is still a long way to go before it becomes commercially viable.

Vincent Doumeizel, director of the food program at Lloyd’s Register Foundation, a charity that supports research and innovation, and senior advisor to the United Nations Global Compact (UNGC), the United Nations sustainable development initiative, is skeptical . “It would take hectares and hectares [of seaweed] to produce a few gallons of oil, “he told CNN Business.” For me, producing algae for biofuel is like using gold for gravel. “

Instead, Doumeizel thinks Sea6 Energy should focus on areas where algae can make an immediate difference. Feeds fortified with algae have the potential to reduce bovine methane emissions because they contain compounds that prevent microbes in a cow’s gut from producing the gas; bioplastics could contribute to decarbonization; and nutritious plants could help feed the world’s growing population, he says.

But first, industry investment must accelerate, says Doumeizel, adding that he welcomes the efforts of companies developing technologies for cultivation on an industrial scale.

Sea6 Energy is not alone in this case. The Norwegian company Seaweed Solutions designed the “Seaweed Carrier”, a leaf-shaped structure that can grow large amounts of kelp in deep water, and the Belgian company AtSeaNova developed a floating machine for seeding and harvesting.

“Marine agriculture is one of the ways (…) to improve the sustainability of the planet,” says Suryanarayan. “Our job and our trip will be well done if we can show that they are economically viable.”

3 dividend aristocrats who must be on your radar for 2022