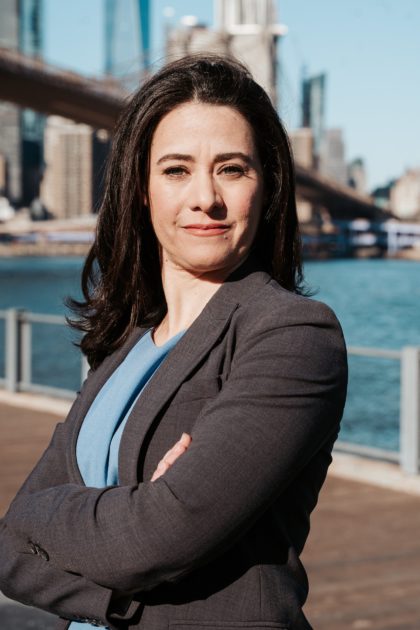 The primary for the state Senate and Congress is now August 23, and in the coming weeks I will be speaking to candidates for both. I asked them to respond to the TCQ&A so they could add their own words. This is the first in the series for State Senate District 27.

As a mother of two school-aged children, Danyela Souza Egorov was appalled at how children were being treated during the pandemic. She and her husband moved to Tribeca seven years ago, largely to use PS 234, and coronavirus politics have pushed her to run for office.

“I could go to the gym, I could go to a restaurant, but my son couldn’t go to school,” she said. “Professional athletes could play without vaccines, but child athletes could not. When I reviewed the options for applicants, no one had done work on behalf of our children during the pandemic.

Danyela worked for a charter school association for a decade while living in California, then moved here to work for a Sunset Park charter, which focused on children who didn’t speak English at home. She is now a strategy advisor for the New York Charter School Association and was elected in July 2021 to the District 2 Community Education Council.

At CEC meetings, friends started asking her if she would consider running for office, and the idea caught on. She had already seen how children had lost a year of education and the resulting gaps in learning, especially for low-income children. “Any elementary school principal will tell you that children don’t learn to read at the same age.”

And as an immigrant from Brazil, Danyela was used to street violence. Every time she left her home there, she said, getting mugged was a possibility. So when she felt the same fear here in New York, she added public safety to her platform. And its two big problems are linked: children say they don’t feel safe and there has been a massive increase in weapons collected from schools.

“The most affected communities are also low-income ones,” she notes. “We must fight for public safety, and we must also fight for justice.”

Danyela came here to attend Harvard’s Kennedy School for Public Policy – ​​just one step in a life built around education. Her mother grew up very poor in Brazil, but she had access to a specialized program as a high school student and went to college for fun when Danyela was a teenager. “I’ve always been very passionate about education,” she said. “It opened so many doors for me.”

2. Married? In partnership ? If so, what is his name and occupation?
Married to Dimitri Egorov, he works in the financial sector.

3. Children? Pets?
I have two boys: Dennis who is 9 years old and Max who is 4 years old. We have a beagle named Urso (meaning bear in Portuguese) and he is 12 years old.

4. Where do you live?
I live in Tribeca

5. What do you do for a living? Or, what did you do before deciding to run for this position?
I have worked with education for over a decade because education has been my passport to a better life. I have helped educators open schools and families find the best school for their children. I am currently vice-president of CEC D2.

6. What are the top three issues you will tackle if you win the election?
My priorities will be public safety (changing the bail reform law), closing the learning gaps caused by the pandemic, and making NYC business and investment friendly.

8. What are the three most important issues for New Yorkers right now?
Public safety, education and economy

9. What do you think is the most important thing to help the district recover from the pandemic?
Bail Reform Act amended to stop allowing repeat offenders to commit further crimes. Until we tackle soaring crime, we won’t be able to revive the economy and families will continue to leave town.

10. Why are you standing for election? What do you hope to change, or do better?
I’m running because I love NYC and couldn’t sit on the sidelines while our reps do nothing to address the real issues in our neighborhood. I was also appalled at how NY treated our children during the pandemic, they were at the bottom of our reps’ priority list.

11. The busiest restaurants: Greca – love the food and it’s near my house

15. We usually order pizza from Gigino Trattoria on Sunday night, my kids love the pepperoni pizza.

17. I’m so happy Laughing Man is in the neighborhood because without it I wouldn’t have a place to schedule meetings

18. How I stay in shape: Running after my children and my dog

21. A recent enthusiasm: My husband is from Kharkiv, Ukraine, and his grandparents, who are 85, eventually fled to Poland at the end of March. I cannot tell you the joy we felt knowing that they are safe and that they will hopefully be able to come and live out their final years with us.

33. I bring people from outside:Broadway

34. What is your favorite park in town? We love Teardrop Park. The water play area in the summer is a hit with my boys.