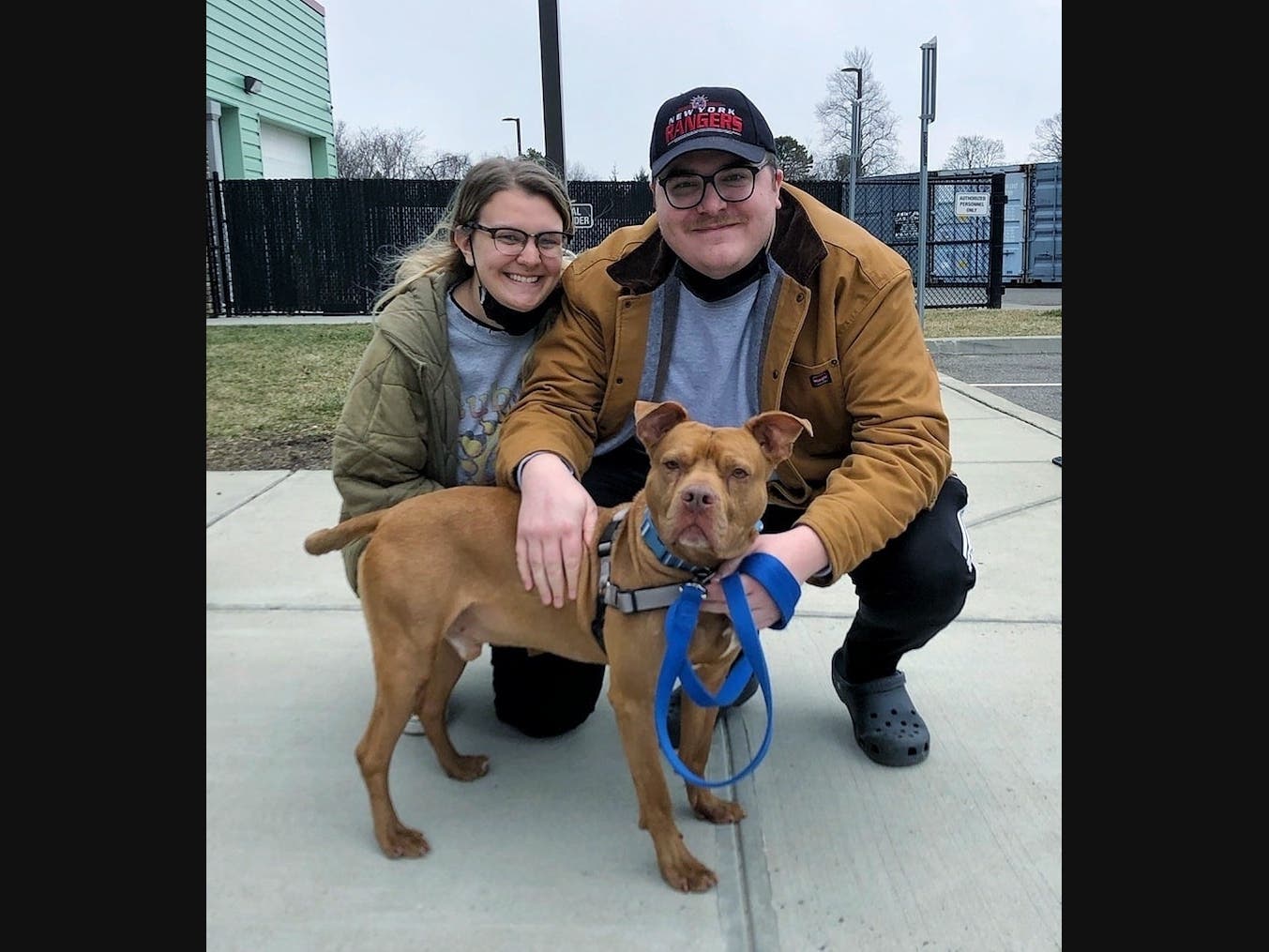 Finnley, a pit bull terrier mix who came to the shelter on September 13, 2019, at the age of 4, was adopted on February 19 by his new owners, Emma Sanes and Harold Sampson, the shelter said.

Shelter volunteer Christine Franke told Patch that Finnley’s story was too much like other shelter dogs.

Find out what’s going on in Babylon Village with free real-time Patch updates.

Before being rescued, Finnley spent most of his life outdoors, chained in a pen. The only shelter he had was a small dog house.

When his owner died, Finnley was found in his garden in horrific conditions.

Find out what’s going on in Babylon Village with free real-time Patch updates.

“He was standing over his house. There was no food or water,” Franke said. “There were maggots in his bowl.”

Franke said he came to the shelter scared, shy and emaciated. Still, it was the best place for him.

“Believe it or not, the shelter was an improvement for him, as sad as that sounds,” she said.

Franke said she named Finnley herself, as his reddish coat reminded him of a stereotypical Irish man.

“If I could have put a little green sweater on him and a hat with a little cigar on it, that would have been perfect,” she said.

The volunteers worked closely with Finnley, teaching him basic commands and how to walk on a leash. But above all, he learned to trust people.

“We have a little room in the shelter that we hang out with them in. So I brought him there a lot and he was hanging out on the bed,” said Lyndsey Grosjean, kennel attendant at the shelter. “We just taught him to be a dog.”

The shelter said Finn needed a quiet home with older children “where he can relax and get some much-needed attention.” He was not friendly with other dogs, the shelter said, and had to be the only pet in a household.

“He can be shy and nervous around new people, but once he warms up, he’s super loving and affectionate,” the shelter added.

Volunteers went to great lengths to get the brown-eyed boy adopted, such as creating the Facebook page, ‘Finn Wants to Come Home’.

But even these efforts took time.

“The shelter posted him constantly, but we never found anyone that was suitable for him,” she said.

Grosjean told Patch that the average time a dog spends at the shelter is six months. But dogs that require experienced and special care can stay there for years.

The shelter’s oldest resident, Sandy, a tan pit bull mix, has been at the shelter for more than 900 days.

But for Finnley, his long-awaited day has finally arrived.

Sanes and Sampson from Lindenhurst told Patch they came to the shelter on Valentine’s Day and were originally interested in another dog. They happened to see a binder of other adoptable dogs, she said, and saw Finnley’s picture.

The couple asked to meet him and were told to be careful as he might get nervous around new people.

When Finnley entered the room, Sampson said, he was carrying two tennis balls in his mouth.

“He came right in, and he jumped on top of me and started licking my face,” Sampson said. “And I was like, ‘What are you talking about?'”

According to Sampson, Finnley adapted quickly to his new surroundings.

The day he went to his new home, Finnley acted nervously in the car. But that same day, his owners said, he cuddled up in their lap and fell asleep.

The shelter, Sampson said, was very supportive after the adoption, from free training to answering any questions.

“It’s the best feeling in the world to have a longtime resident dog, especially a dog like Finnley who comes from a really abusive situation, to come into a house where he’s curled up on the couch,” said Franke said.

The love the shelter gave Finnley, Sampson said, made it easy for him to adapt to his new home.

“I let them know that I’m sure it was hard for them to let go of him,” Sampson told the shelter, “but we were going to love him just as much.”

Grosjean said that by sharing Finnley’s story, others can learn that a shelter dog can be the perfect companion – all it takes is a little patience.

“I think people misunderstand shelter dogs and don’t give them a chance to decompress in the house. Shelters are very stressful places,” she said. “Give these dogs a chance to open up in your home.”

Sampson told Patch that he and his fiancée had recently moved into the lower section of his parents’ house to care for his mother, who has ALS. Finnley, he said, became the “perfect” dog to complete his family.

“We thought it was a good time to bring some positivity into the house,” Sampson said. “He certainly did.”

Anyone interested in adopting a dog, cat or small creature can visit Babylon Animal Shelter websiteemail BAARC@townofbabylon.com or call 631-643-9270.