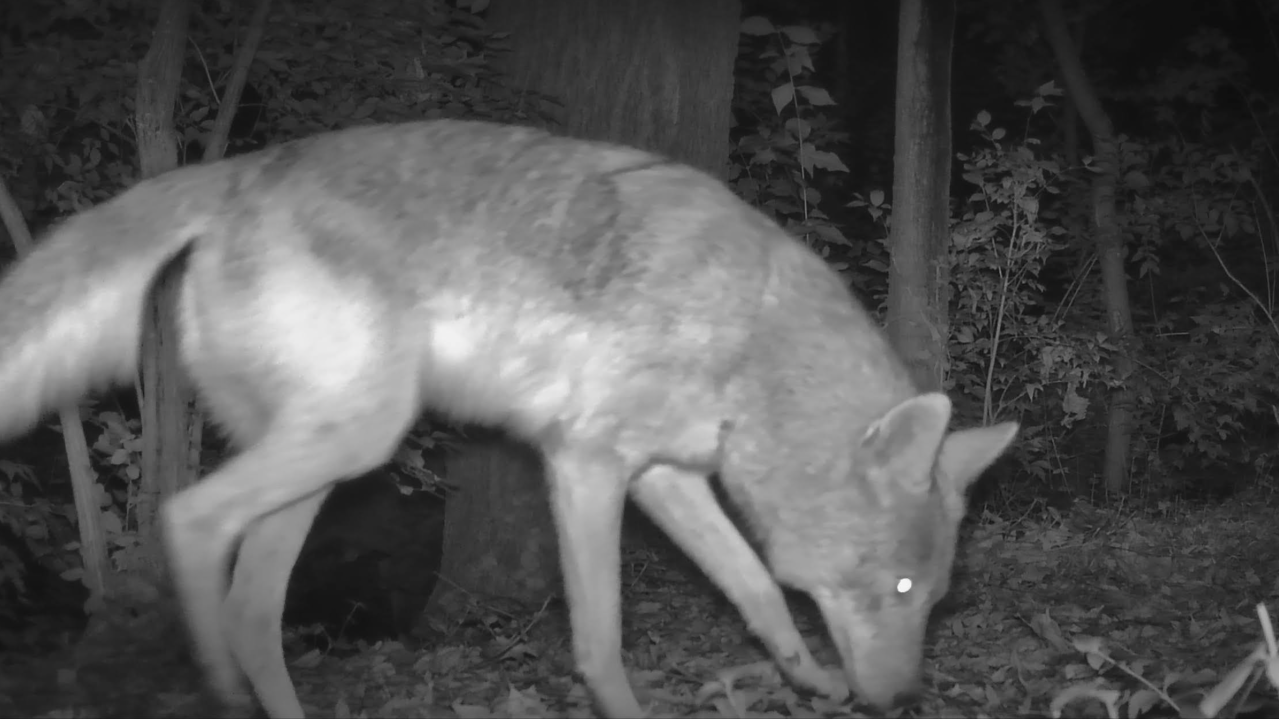 GREENWOOD — Some residents of a Greenwood subdivision say coyotes hunt in their yard most nights, and they wonder if nearby I-69 construction could be the cause.

For several months, trail cameras in the Windsong Estates subdivision off Smith Valley Road have been capturing hungry coyotes searching for food. Sightings are most common near Frances Creek, which runs through the neighborhood.

“They’re pretty big,” owner Eric Jones said. “They’ve been showing up since probably last summer.” A camera set up along the creek line shows one, two, and sometimes three coyotes searching the neighborhood for food. “It kinda surprises me how close they are to home,” Jones said.

Like others in the neighborhood, Jones wonders if the expanding construction to convert SR 37 to I-69 has displaced coyotes and drawn more wildlife into nearby residential areas.

Geriann Albers, a wildlife biologist with the Indiana Department of Natural Resources, says it’s possible a large-scale construction project like I-69 has forced some coyotes to seek new territory.

Dog or coyote? DNA results to identify a mysterious animal

“Construction along I-69 has destroyed some of the green space on the right that used to be trees and brush and everything,” Albers said. “So that might have moved some of the coyotes a bit.”

At the same time, Albers points out that coyotes with dens near the I-69 construction area were likely already venturing out of the immediate area to feed.

“Coyotes typically cover, even in urban areas, a square mile or two,” she said. “So that probably wouldn’t have been their entire home range. It might have taken their activity away from that area.

Right now is when puppies born last year leave their dens and venture out into their own territory, Albers said.

“Coyotes are territorial, so they define a space that is their space and then they keep all the other coyotes out of it,” she said. “But these territories are really dynamic over time. So they can change, they can get smaller, they can get bigger over time, it can change every year depending on what’s going on around them.

Albers also points out that humans have been sharing the suburbs with coyotes for years. In general, she says, sightings may seem more common as more property owners have exterior cameras on their properties. “You definitely think twice when you want to put the dog in the backyard,” Jones said. “I really want to keep an eye on him.”

the MNR website has a number of coyote-related resources in the neighborhoods. These include a list of steps owners can take to avoid attracting animals:

MNR also has a website to report wildlife issues and request assistance in removing unwanted animals. You can find this information here.

This watch shows how beautiful recycled plastic can be